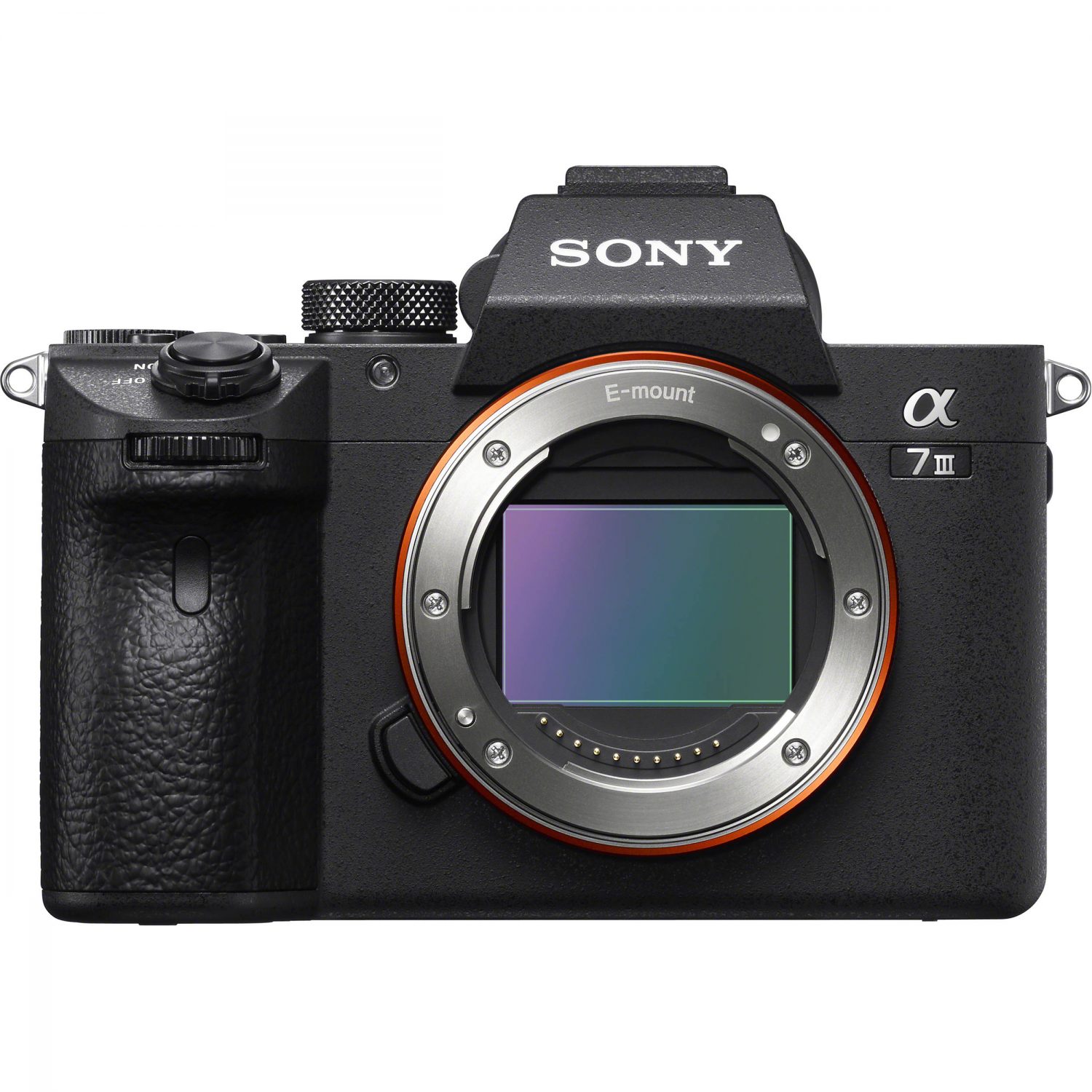 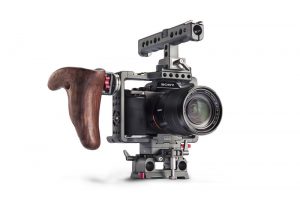 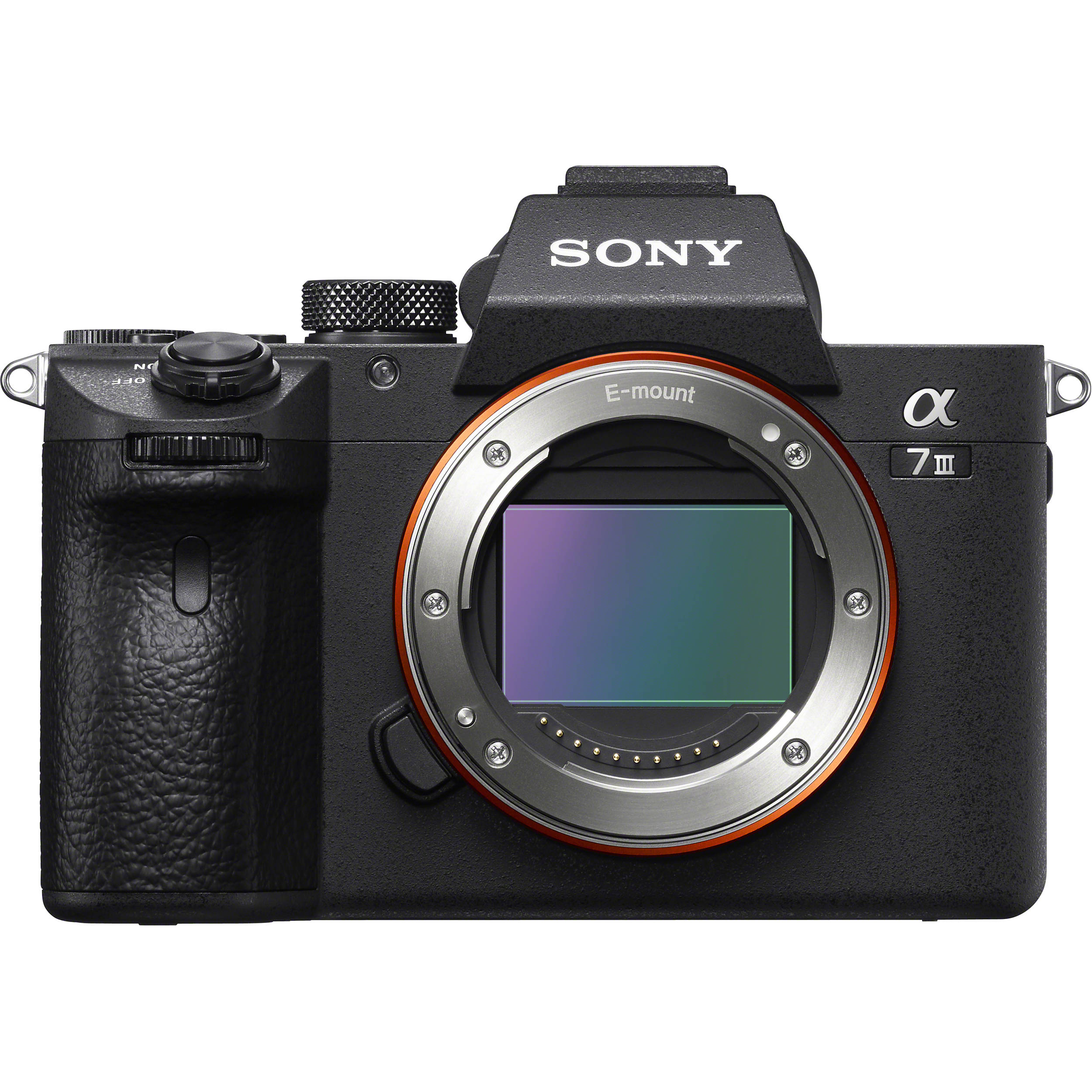 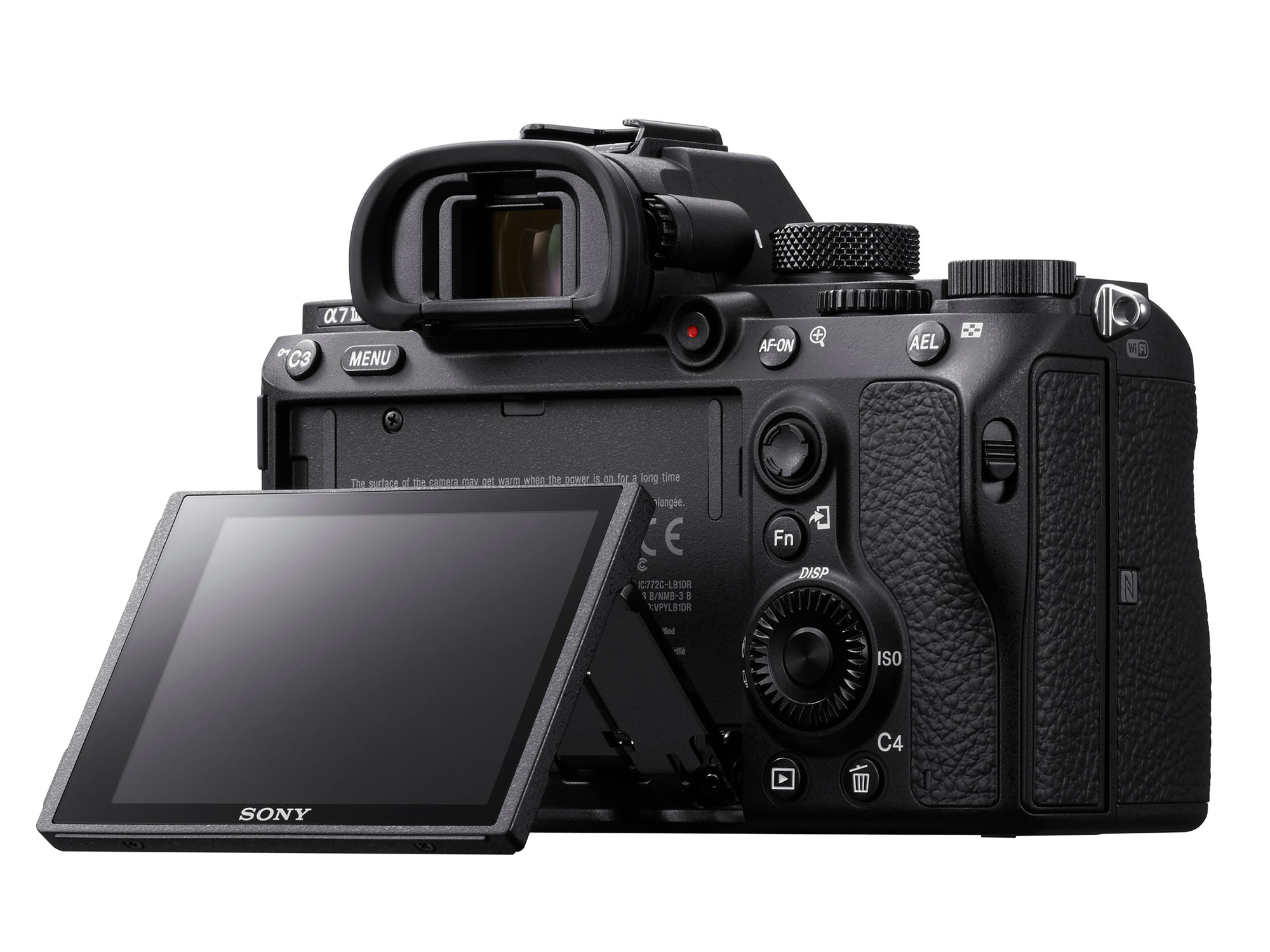 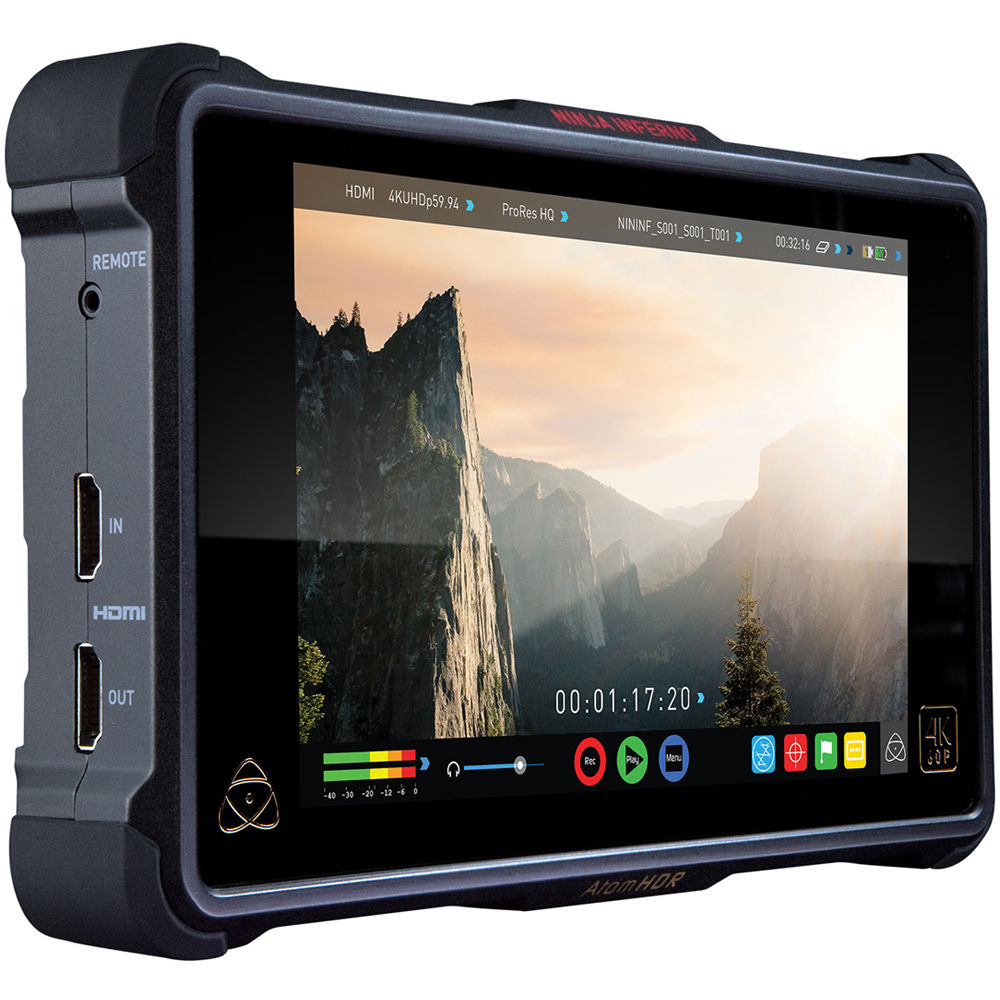 Distinguished by its updated sensor design, the Alpha a7 III Mirrorless Digital Camera from Sony is a well-rounded camera suitable for both photo and video applications in a variety of working situations. Refined for improved speed and low-light performance, the full-frame 24.2MP (versus previous 12.2MP Sensor) Exmor R BSI CMOS sensor and BIONZ X image processor pair to realize an impressive 10 fps continuous shooting rate and improved autofocus performance for faster, more reliable subject tracking along with wide frame coverage. This updated Fast Hybrid AF System employs a combination of 693 phase-detection points and 425 contrast-detection areas for quicker acquirement of focus in a variety of lighting conditions, and also maintains focus on subjects more effectively. In addition to speed and AF, the processing improvements also help to realize greater image clarity and reduced noise throughout the sensitivity range from ISO 100-51200, which can further be expanded to ISO 50-204800. Video recording capabilities have also been extended for enhanced quality when recording UHD 4K video with the full width of the full-frame sensor to minimize moiré and aliasing. Additionally, benefitting both stills and video operation, the a7 III utilizes a 5-axis SteadyShot INSIDE sensor-shift image stabilization, which is now effective to minimize the appearance of camera shake by up to 5 stops.

Beyond just updates to the imaging system, the a7 III’s body design has also been revised to include a rear 3.0″ 922k-dot touchscreen LCD, which has a tilting design to better support working from high and low angles. A 2.36m-dot Tru-Finder OLED EVF is also featured for bright and clear eye-level monitoring. For greater shooting flexibility, dual SD memory card slots are now featured, and a larger NP-FZ100 battery is also employed to achieve up to approximately 710 shots per charge. Suiting the camera’s use in trying conditions, the magnesium-alloy chassis and weather-sealing also render the a7 III dust- and moisture-resistant.

24.2MP Exmor R BSI CMOS Sensor and BIONZ X Image Processor
Featuring a back-illuminated design, the full-frame 24.2-megapixel Exmor R CMOS sensor works with the BIONZ X image processor to offer high-resolution stills and video while minimizing noise and improving speed. The previous a7S II had only a 12.2 MP resolution. This sensor structure works with a gapless on-chip lens design and an anti-reflection coating to improve light collection and enhance detail. Also, the copper wiring layer dramatically improves data transmission speed for creating 14-bit, high-resolution stills with a native sensitivity range from ISO 100-51200, which can be further expanded to ISO 50-204800. Also, it enables internal UHD 4K video recording with a wide dynamic range using the full width of the full-frame sensor. The BIONZ X processor also works in conjunction with a high-speed front-end LSI to realize faster processing times along with the ability to capture an impressive 15-stop dynamic range at low sensitivity values.The sensor and processor combination also avails fast continuous shooting at up to 10 fps at full resolution, for up to 177 consecutive frames, and with full-time AF/AE when working with either a mechanical shutter or an electronic shutter. If shooting in live view mode, a continuous shooting rate of up to 8 fps is also possible.

Fast Hybrid AF System
An evolved 4D FOCUS system now employs a combination of 693 phase-detection points, which cover approximately 93% of the frame, along with 425 contrast-detection areas for reliable and quick autofocus and subject tracking performance. This Fast Hybrid AF System now achieves twice the focusing speed and more reliable tracking compared to previous a7 models, as well as improved low-light focusing. The use of phase-detection points also enables the use of A-mount lenses via the optional LA-EA3 or LA-EA1 lens mount adapters with full continuous AF/AE tracking compatibility.The apt focus system also lends itself to a variety of focusing functions for refined accuracy, including Lock-on AF, which maintains focus on moving subjects throughout the use of a configurable frame that is set over the desired moving subject, and Expand Flexible Spot, which employs neighboring focus points to retain focus on moving subjects even if the originally selected point loses focus. Additionally, Eye AF can be used to base focus on recognized subjects’ eyes for portraits and is available in both AF-S and AF-C modes. Autofocus can also be used in conjunction with the Focus Magnifier function for critical focus when homing in on minute subject details. The rear touchscreen can also be used for Touch Focus control, and a Touchpad Focus Control mode lets you use the rear screen intuitively while keeping your eye to the viewfinder.

5-Axis SteadyShot INSIDE Image Stabilization
Packed into the robust a7 III is a 5-stop effective 5-axis SteadyShot INSIDE image stabilization system that compensates for five different types of camera shake encountered during handheld shooting of stills and video. This allows users to confidently use any lens, even adapted lenses, for critical imaging without encountering blur from camera shake.For long focal lengths, the system will correct for pitch and yaw adjustments. Macro and high-magnification imagery, on the other hand, will benefit from the inclusion of horizontal and vertical shift compensation. All shooting styles will get usage out of the roll compensation. All 5 axes of stabilization will function at all times, even when used with third-party lenses and adapters or lenses with built-in optical stabilization.

Full HD at 120fps
Both the previous a7S II and the new a7 III can record at a maximum of 100fps (PAL) or 120fps (NTSC) in 1080p, giving you pleasant slow motion footage. However, the new a7 III does NOT crop the sensor by a heavy 2.2x like the a7S II so the field of view of the lens does not change significantly like in the previous model. On the a7 III, you also have the option of conforming slow motion in camera with the Q&S mode, which allows you to undercrank down to 1fps.

Sony FE 24-70mm f/2.8 GM Lens
A fast, standard zoom favored for its versatility, the Sony FE 24-70mm f/2.8 GM is a wide-angle to short telephoto lens designed for E-mount mirrorless cameras. Featuring a constant f/2.8 maximum aperture, this lens maintains consistent performance throughout the zoom range and benefits working in low-light conditions and with selective focus techniques.
Weather Sealed
We carry 3 necessary FSND Filters which can be inserted manually in front of the sensor (ND .6, ND 1.2 and ND 1.8 = 1, 2 and 3 stops). The new ARRI Full Spectrum ND filter serves as the front line of image control. A natural succession to ARRI’s high quality products, this external FSND filter not only provides protection but has a palpable effect on image quality.

Tilta Ikan ES-T17-A Sony Alpha Series Handheld Camera Cage Rig
Tilta’s ES-T17-A is an impressive and versatile camera rig for the professional shooter. It is the only form fitted cage compatible with all six versions of the Sony a7 full frame mirrorless camera. The cage is designed to fit around the hot shoe mount with easy access to the battery and side compartments. Among its many features include more than a hundred threaded hole mounts, a cold shoe mount and a 15-mm baseplate with an integrated lens adapter.

UHD 4K Video Recording in XAVC S Format
Internal recording of UHD 4K movies is possible in multiple frame rates up to 30 fps and using 2.4x oversampling renders greater detail and full pixel readout is possible, that is void of pixel binning, for higher quality imagery with reduced moiré and aliasing. Full-frame 4K recording has also been dramatically improved for improved quality when working at mid to high sensitivities to permit full use of the entire sensor width. Full HD 1080p recording is also supported in frame rates up to 120 fps, and both resolutions utilize the 100 Mb/s XAVC S format contained within an MP4 wrapper with 4:2:0 sampling. The high-speed, 120 fps recording also enables 4x and 5x slow-motion movie recording with the frame rate set to either 30p or 24p. In addition to high-resolution internal recording, uncompressed HDMI output also enables the use of an optional external recorder for clean 4K recording with 4:2:2 sampling.

Color and Gamma Control
Affording extensive customizable color and gamma controls, the a7 III allows users to adjust the gamma, black level, knee, color level, and more. Also, users can use the same S-Log2 Gamma Curve that is found on high end Sony Cinema cameras that squeezes up to 1300% more dynamic range into the video signal then traditional REC709, for increased post-production flexibility. HLG (Hybrid Log-Gamma) support is also available, along with the BT.2020 color space, for recording within a wide color gamut and, in addition to S-Log2, S-Log3 is also available for producing an effective 14-stop dynamic range with increased grading control in the shadow to mid-tone regions of the image.